The de Young Museum formally opened in 1895 after exhibits were hosted at a winter fair in 1894. Over the years, its various incarnations have attracted museum curators like John Buchanan and architects like Herzog and De Meuron. 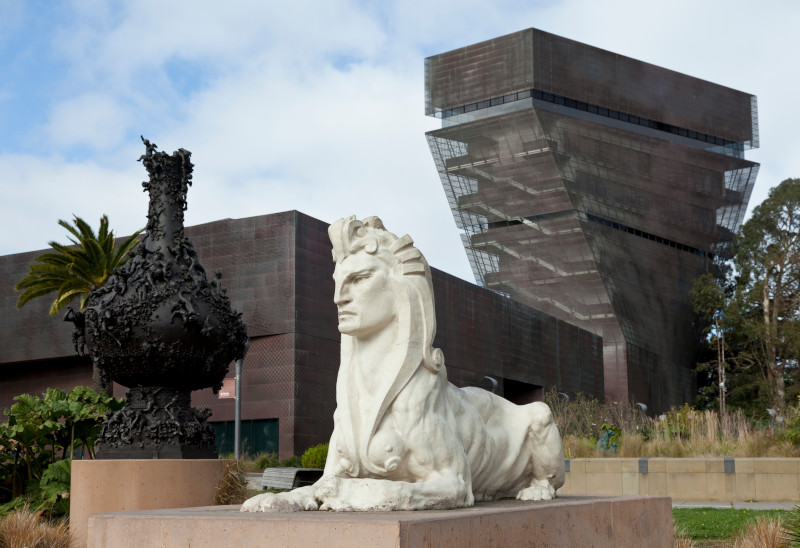 Collections and Artworks You Must See at the de Young Museum

The de Young and Legion of Honor museums hold one of the most diverse collections in the western United States. This public arts institution has both permanent and special de Young Museum exhibits, bringing memorable art experiences to visitors and residents alike.

The prolific de Young exhibition archive currently exceeds 27,000 works of art. It's renowned for its North American art from the 17th century onward and paintings, costumes, and textiles from Africa, the Americas, Oceania, and Asia.

Let's look at some of the most memorable pieces you should see on your trip to San Francisco's de Young Museum.

The textiles collection at the de Young spans over 3,000 years and holds over 13,000 pieces. It's one of the largest and most comprehensive collections in the United States, representing cultures from 125 countries. Wearable garments include cloaks, robes, ponchos, dresses, and headdresses.

But that's not all. The de Young has rugs, carpets, tapestries, 18th and 19th-century European fans, plus more unusual art pieces.

Of the many de Young Museum paintings, this captivating portrait is a classic example of the finest in American impressionism. Tarbell uses pastel hues and soft strokes to create a dreamlike effect with oils on canvas.

A woman occupies the center of the piece, looking away at something we can't see. The breeze catches her lilac veil and obscures her face, adding to the mystery. The colors of her cream hat and dress balance the colder hues of the background.

Edmund C. Tarbell was highly acclaimed during his lifetime, both praised and criticized for his unwavering focus on capturing beauty. He was a founding member of the Ten, a group of American artists that spearheaded the Impressionist movement. 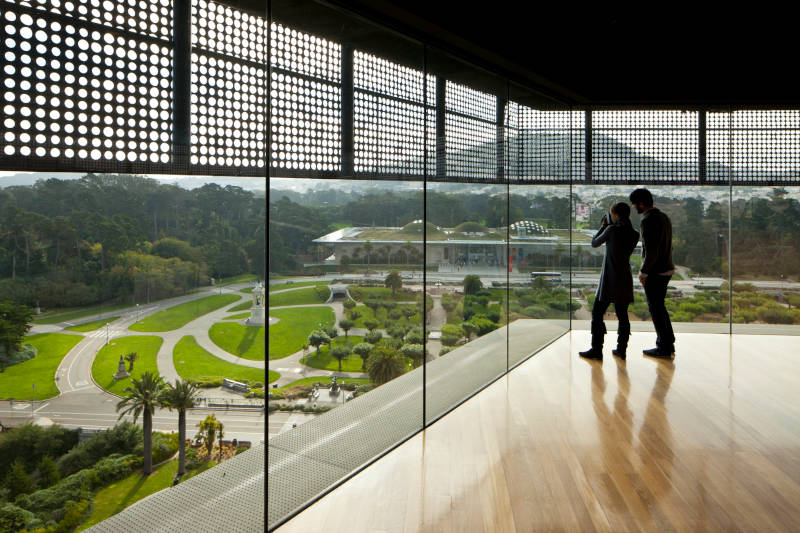 Artworks and Artifacts from the Jolika Collection

The de Young's Jolika Collection contains 3,000 objects amassed from New Guinea, some dated more than 1,300 years old. Around 400 pieces are usually on view in the museum at any time, including ritual masks, carved figures, musical instruments, and decorated human skulls.

The remarkable Jolika collection was gifted to the de Young Museum by avid art collectors John and Marcia Friede. It was named after the first two letters of their children's names — John, Lisa, and Karen.

The Jolika is widely considered one of the best collections of New Guinea art in private hands. It has placed the de Young at the forefront of preserving New Guinea art from within the United States.

The fantastical, imaginary landscape of Rainy Season in the Tropics features an awe-inspiring array of cliffs and rich tropical fauna. But the magnificent double rainbow takes center stage and really elevates this piece for viewers of every generation.

This depiction of a double rainbow is scientifically accurate, as Church reverses the color spectrum in the second of its two bands. And there are other pairs within the oil painting — two travelers and two palm trees.

Frederic Edwin Church was a second-generation Hudson River School artist who retreated to Jamaica with his wife, Isabel, in 1865 following the deaths of their two children. Some interpret the travelers in the painting as their children, transcending to a heavenly place.

The de Young Arts of Africa, Oceania, and the Americas department was founded in 1971, and the African art collection has grown rapidly ever since. It now features around 300 culturally-significant objects. The number of rare and unusual works here makes the de Young one of the prominent African art museums in the U.S.

The de Young holds pieces from eastern Sudan, the Guinea coast, and most other regions of the continent. However, art is presented thematically rather than geographically, so you can fully appreciate the aesthetics of each object within a clear context.

Highlights include the medieval Benin Bronzes, an 11th- to 12th-century Mali wooden artifact, and works from various contemporary black artists, such as sculptor El Anatsui. 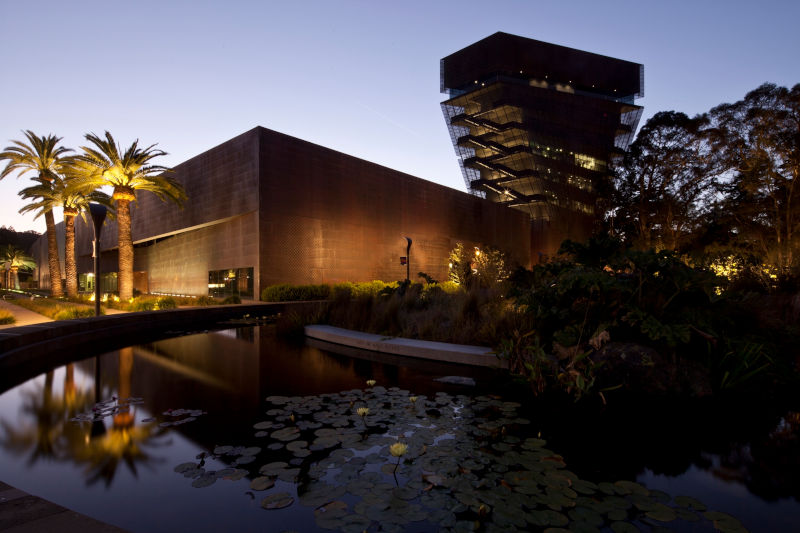 The heiress within the piece lounges against a rock in the foreground. Behind her is a bizarre collection of characters embroiled in what could be a performance or a battle.

Dalí scattered other details throughout the seascape, like mountains in the background and a cliff at the edge of the piece. But Spreckels Munn puzzles us the most with her dazed expression and markers of high-society femininity.

Art of the Americas Collection

An extensive section of the de Young's American art collection comes from the West Coast of North America, Mesoamerica, and Central and South America. Indigenous art of the Americas has featured prominently in the de Young's offerings since its 1894 exposition beginnings and now includes nearly 2,000 works.

Special galleries are devoted to ancient objects from Mexico, such as Mayan artwork and ceramics. Other notable pieces include several stunning Teotihuacan mural fragments and traditional ceramics by Pueblo potters.

Art from North America includes Native American baskets from the Pacific Northwest and California and a collection of almost 400 works by Alaska Native and Canadian Inuit artists.

The de Young Museum in San Francisco is more than an art gallery — it's a cultural cornerstone that intrigues and educates visitors year in and year out.

With San Francisco C3® tickets, you can choose three top Bay Area attractions and save up to off the ticket price. And for more San Francisco travel tips, check out this comprehensive guide.

To get the most out of your stay in San Francisco, we recommend finding lodging near San Francisco's top attractions. Use this map to find the right lodging for you:

A Complete Guide to San Francisco's Piers and Boardwalks

Connect with Wildlife at the San Francisco Zoo and Gardens

Feel the Wind at Your Back With Bay City Bike