There are many things to think about when planning a trip to New York City (here's our guide on how to do just that). One of these considerations is how best to sample the local cuisine. 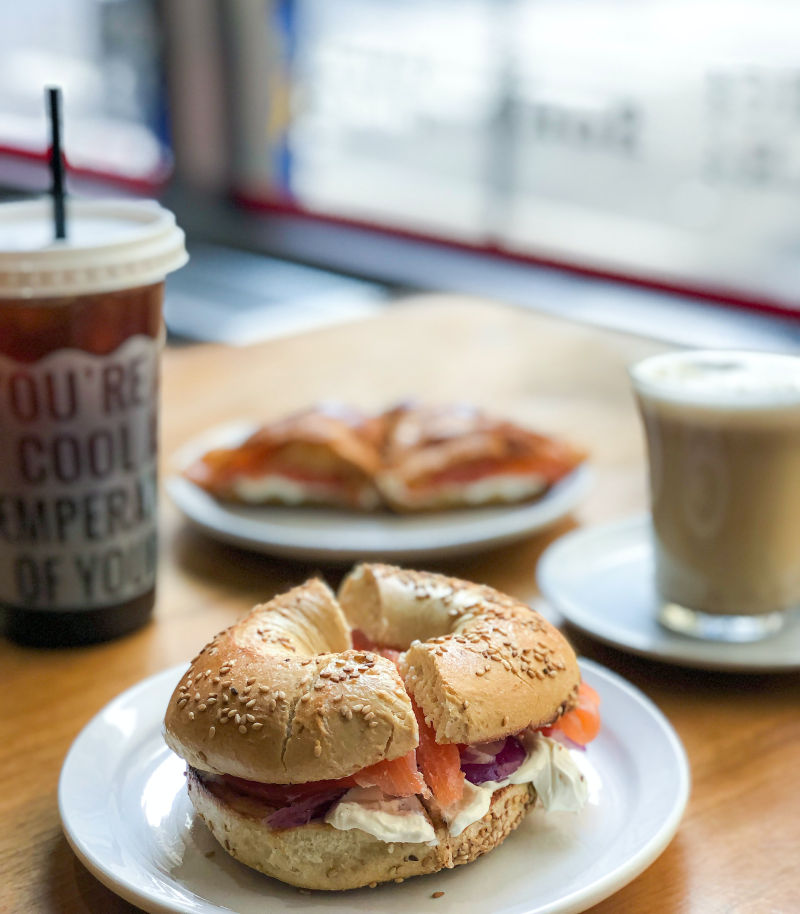 The main difference between a New York bagel vs. a regular bagel is a strange step in the cooking process. Traditional New York style bagels are submerged in boiling water for a couple of minutes before they're baked. Sometimes called "water bagels," boiling the dough sets the outside to give them a crispy exterior and chewy texture.

How can you tell you have a true New York bagel in your hands? Turn it over — if it has a grid pattern on the bottom, it was steamed first instead of boiled. Steamed bagels also lack the roundness and shininess of New York style bagels.

Fresh New York bagels are also traditionally never toasted, and they're fatter than a mass-produced bagel or wood-fired Montreal-style bagel. They've even grown larger over the decades — from 3 oz. in 1915 to 6 oz. in 2003.

Different cities around the world have developed their own style of cooking and serving bagels. But the New York style bagel is unique to New York — it isn't easy to find an accurate duplication anywhere else in the country.

The origin of the bagel itself is disputed — but we can trace the start of New York bagels back to the Ashkenazi Jews of Poland. Jewish refugees from Eastern Europe began arriving in New York City in large numbers in the 1800s. They brought traditional foods, such as challah, brisket, matzo ball soup, and bagels.

Good bagels are cheap, filling, and delicious — so they soon became a mainstay in the Jewish communities of the Lower East Side in Manhattan. But up until the 1960s, little was known of bagels in NYC outside of the Jewish community. Nowadays, their popularity has spread and been adapted into various recipes throughout the world. 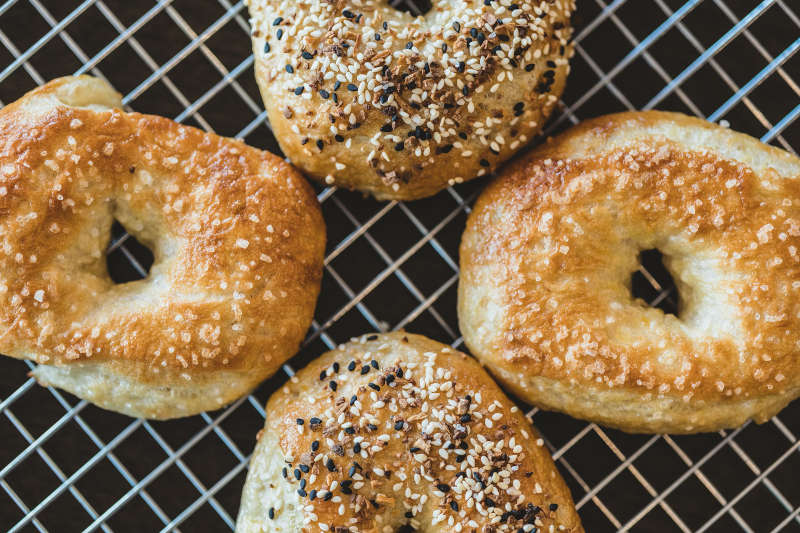 The Crackly Crust on the Outside With a Soft Texture Inside

Traditionally, makers then top their bagels with:

Alternatively, they can keep it as a plain bagel — toppings can still be added later.

Bagels are then tipped onto burlap-covered wooden boards that have been coated with cornmeal or semolina, or wetted with warm water. They're baked in the oven for a few minutes. These steps give a New York style bagel its signature chewy texture on the inside, crackly crust on the outside, and distinctive flavor.

NYC bagel purists will claim the main difference between a New York bagel vs. a regular bagel is the water you boil them in. Much like a specific vineyard terroir is used to make a wine, certain minerals in New York City tap water are attributed to creating the best bagels.

These include low concentrations of calcium and magnesium and a high level of sediment. This makes the water softer, which is thought to strengthen the gluten in the bagel dough.

However, the water is not the only factor in the New York bagel experience. The ingredients and traditional processes for making them both play their part too.

The Serving Options: Bagel With Lox or Cream Cheese

New York style bagels are usually high in calories, and eating just one can be a satisfying meal. But what are they traditionally filled with?

To make a bagel like the Jewish community did in the 1930s, "schmear" your bagel with cream cheese. Then layer your bagel with lox or another form of cured fish. These toppings were combined as a kosher adaptation of eggs Benedict.

Cinnamon raisin and other sweet bagels are popular, but these originated in the 1950s and 60s. They're not traditional and are even frowned upon by some New Yorkers. However, a visit to just a few New York bagel shops will show dozens of choices now, including plenty of less traditional flavors. 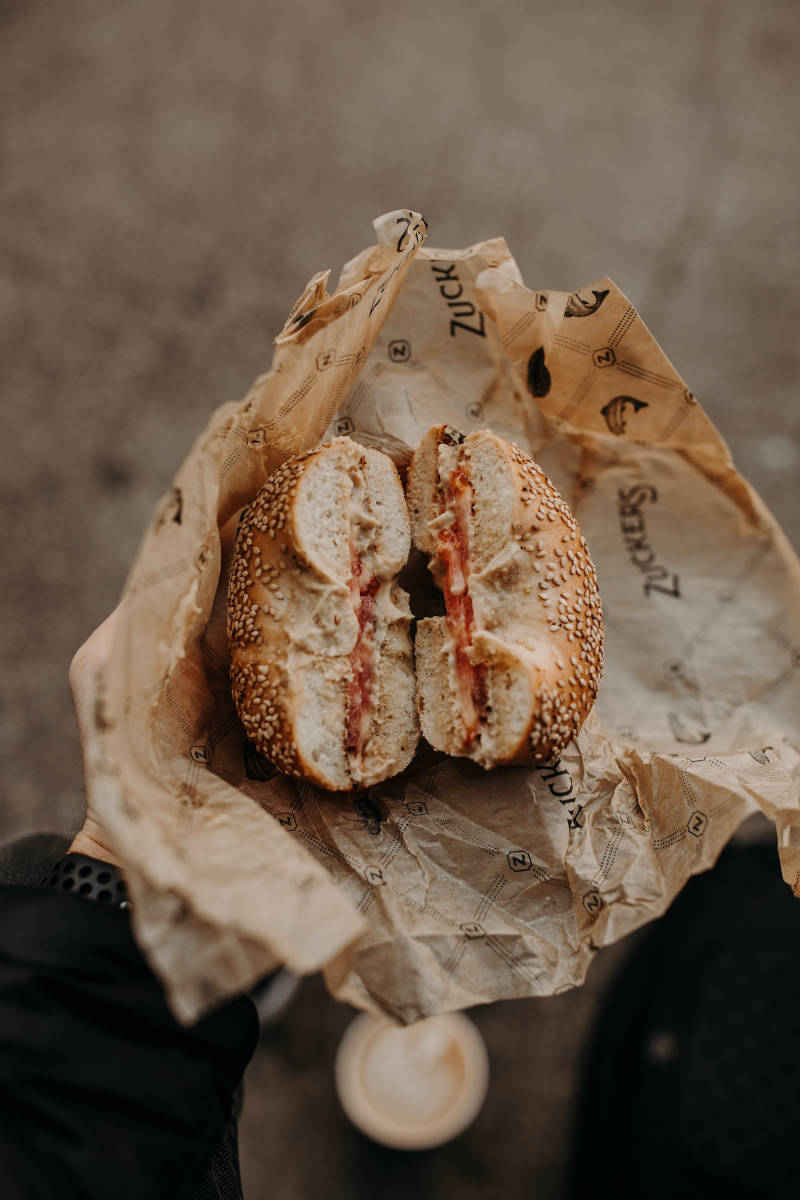 Although there are bagel shops on every corner, only a few places can contend for the title of the best bagels in NYC. These joints are all very easy to reach by subway — see our full guide on how to use public transport in New York City.

The glossy bagels at Absolute are often served when they're still warm, so toasting is unnecessary. Along with their budget prices, it's no wonder Absolute has lines stretching out the door at lunchtime. The everything bagel and bright orange egg bagel are customer favorites. Get either one served with a fresh coffee.

Visit one of the five Brooklyn Bagel locations across Queens and Manhattan and pick up a huge, spongy bagel. While Brooklyn Bagel boasts the more common cream cheeses, smoked fish, and deli meats, they're also well known for "crazy cream cheese spreads." Flavors include honey bacon sriracha, strawberry, and cannoli.

Boiling and baking fresh bagels throughout the day, Bagel Bob's has been in business for over 21 years. They're kosher and have something for everyone. Their extensive menu includes 14 varieties of bagels, fish salads, and five tofu cream cheese substitute options. Bagel Bob's unusual dairy cream cheese flavors include lox spread, sundried tomato, and Nutella. 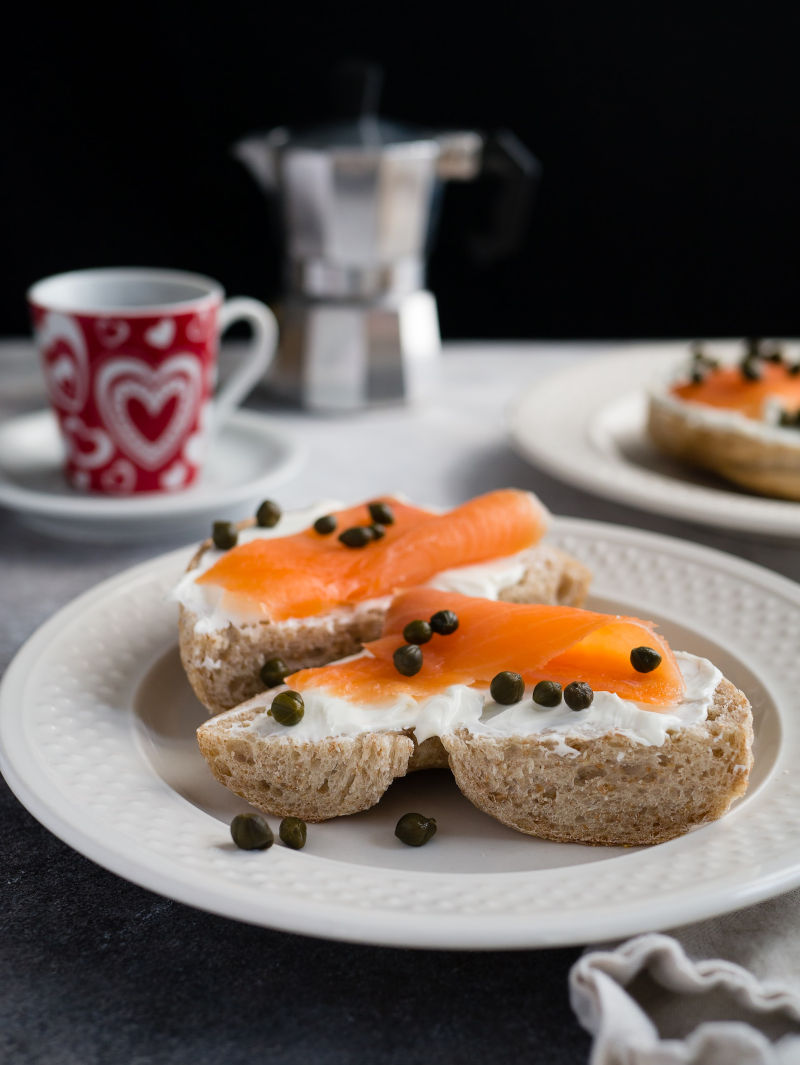 Of course, there's so much to experience in New York City besides their world-famous bagels. Whether you're in NYC for just a few nights or for a longer stay, you'll want to choose for yourself from a range of attractions to visit. With several types of CityPASS® tickets to choose from, you're sure to save money however you spend your time.

Visiting the Statue of Liberty: What you need to know

Why New York Is a Top Travel Destination During the Holidays

7 MoMA Paintings and Artwork You Must See