SHARKS! Predators of the Deep Gallery Surfaces at the Georgia Aquarium

Bah-nump, bah-nump! In the summer of 1975, the sound of those two notes struck fear, foreboding and dread into the hearts of moviegoers around the world. Stark and menacing, that musical introduction foreshadowed the appearance of the titular antagonist in Jaws, Steven Spielberg's blockbuster movie about a voracious man-eating shark prowling the coastal waters of fictional Amity Island, New York.

While Jaws rates as a 10 in terms of popular entertainment, it isn't quite as spot-on when it comes to accurately portraying shark behavior. SHARKS! Predators of the Deep, a dazzling new gallery at the Georgia Aquarium, seeks to correct common shark misconceptions by bringing visitors "face to face with the most enigmatic and misunderstood creatures in the sea."

Years in the making, this $100 million gallery is one of the largest shark exhibits anywhere in the world. Featuring many unique elements and state-of-the-art technology, the gallery guarantees an unforgettable interaction with one of nature's most formidable and fascinating apex predators. Five different species of sharks—hammerheads, silvertips, sand tigers, tiger sharks and silky sharks—are featured in the 20-foot-deep, 185-foot-long exhibit and can be spotted in the floor-to-ceiling acrylic windows. Joining the sharks are thousands of shimmering pilchard fish, swimming and schooling throughout the 1.2 million-gallon saltwater tank.

The exhibit turns the tables on the mythology surrounding sharks, offering a fresh perspective on the vital role these creatures play in the health of the ocean and pointing out that, among the many challenges that sharks face, humans are by far the greatest threat, in terms of overfishing, habitat loss and climate change.

Thrilling interactive experiences, including a dive cage that moves through the exhibit underwater, also will be available to guests (no diving certification required). Guided by Georgia Aquarium Dive staff, the 2.5-hour shark cage dive promises to be one of the most thrilling museum experiences ever designed. Advance reservations for the dive cage encounter are necessary and can be made through the Georgia Aquarium website. 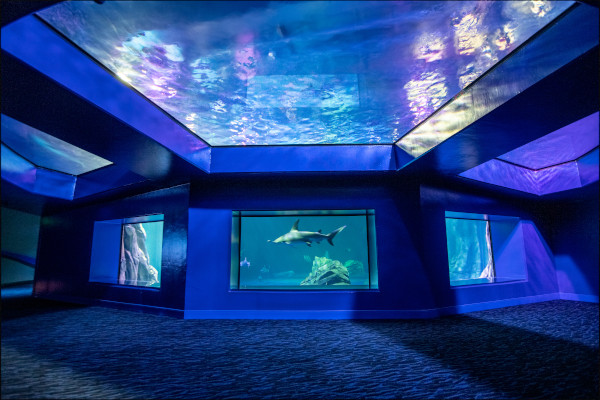 SHARKS! is part of the aquarium's "Expansion 2020" project, which, in addition to the new gallery, includes a swanky new visitor entrance, a covered plaza and retail space.

Budget tip: For those ready to dive into sharks and further explore Atlanta, an Atlanta CityPASS® ticket is a great accessory. CityPASS® tickets get travelers into five top Atlanta attractions, including the aquarium and World of Coca-Cola, while saving nearly half off the cost of purchasing the included admissions separately.

How to Plan an Atlanta Vacation